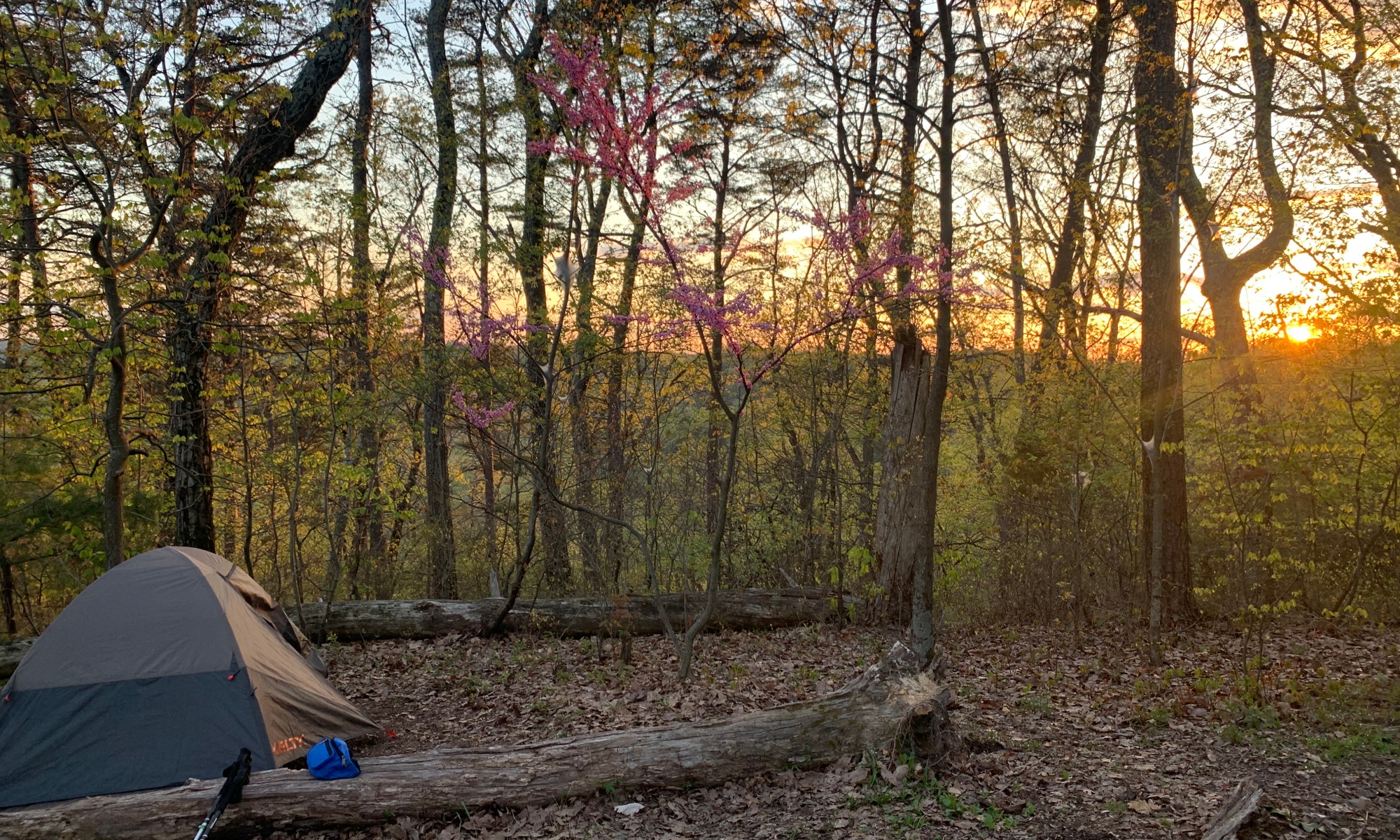 Why are you here? Why are you doing this? It was 2 am. Two days into my hike of Indiana’s Knobstone Trail, I lay in my tent in the cold dark, waiting for ibuprofen to dull the throbbing pain in my left knee that had woken me already and would wake me again in three hours.

It was my first backpacking trip, and I had decided, as a 49-year-old woman who had camped five times in the previous thirty years, to set out alone to thruhike the Knobstone Trail, a trail that is not only the hardest in Indiana (I mean, big deal, right?), but, the cognoscenti agree, a legitimately hard trail.

Earlier in the day on day 2, I had concluded with absolute certainty that I would not be able to complete the planned trek: according to the mile markers a 47-mile hike, but according to the AllTrails app, which clocked 1.1 or 1.2 miles between each of the mile markers, it was going to be more like 52 miles. There was Just. No. Way. that I could do that—I’d had my doubts about my ability to do 47 miles in four days, but at that point, one and a half days in and intimately aware of how difficult the terrain was, I knew that I couldn’t have done 47 miles of those steep ascents and descents and that I sure as hell wasn’t going to do 52. I thought maybe I’d stay on trail the full four days and just go as far as I could . . . but now, 12 hours later with a knee that wouldn’t let me sleep, it seemed that the wisest thing to do would be to hope my knee would let me make it six more miles to the next trailhead and then get a ride back to my car.

I’d had some scary moments on the second day—one descent so steep that I had crab-crawled on my ass down the dilapidated log-and-railroad-tie stairs, angling my too-heavy pack back so that if I fell I’d fall up rather than down. That evening, on a less-perilous descent into another valley, I’d felt faint, the potentially dangerous outcome of how stress kills my appetite, a thing I knew about from emotionally stressful periods going back forever but never realized happened with physical stress, too, because this was the hardest physical thing I’d ever done. I sat down right where I was, scooting over so that a tree was between me and falling down the hill, and ate soy jerky and Sunkist candy and then set a timer so I wouldn’t get up and try to keep going until some of that had gotten into my bloodstream.

Scary moments, and now my knee hurt, but this wasn’t going to be an abject failure—I probably wasn’t going to be medevac’d out, and I was even camping that night with a friendly father-daughter pair who had happened upon me and asked if we could camp together, so if my knee was worse in the morning, I wouldn’t be alone. But the trip also wasn’t going to be a stunning success. What was it going to be, then? A decade into the social media era, it feels almost natural that if I do something, I have to figure out how it becomes a story. In the Before Times, only the people who loved you the most in the world would ever actually see your damn vacation pictures, but now, if you don’t post about something cool you did, did it actually even happen? But here I was lying awake, not sure what to think about the experience I was having and not even sure I wanted to solicit people’s attention online by posting anything about it at all. But if this wasn’t going to become part of my story, part of my what-we-call-“personal-brand,” then, the questions recurred, Why are you here? Why are you doing this?

If I wasn’t out here kicking my own ass on purpose in order to get attention and approval and likes and “You go, girl”s and “I wish I could do that”s . . . if that truly wasn’t it, then what was it? I needed to answer the questions before I could go back to sleep.

Well, for one thing, I haven’t felt depressed since last June, and I started exercising in July. It was true. I started trail biking in July, did some indoor running when the weather got cold, and then added hiking in January. I got through the pandemic without sinking into depression, with my anxiety in check. That’s good. That’s intrinsically good, intrinsically worth it. And though there are no guarantees, it’s likely that I will live longer, and be healthy longer, by getting serious about exercising now. Can’t argue with that. That’s a good one. There was a third thing, but I had forgotten it by morning.

I felt better in the morning, but I knew from the chatty candy-loving runner I’d met the second day that the eight miles beyond the Leota Trailhead would make me regret my choices if I decided to keep going, so I arranged to be picked up at the trailhead. I hiked with the father and daughter for three miles, and then I let them go ahead so I could take a rest. It was a beautiful morning, with a light, cool, drizzly rain pattering over me for my last three miles hiking alone.

I made it to the trailhead—a total of 29 miles over two and a half days: not too shabby!—got driven back to my car, made it home to Fort Wayne, crashed. In the subsequent days, lying in bed at night, I would remember quiet moments of watching plants sway in the breeze . . .

. . . the way the sun came through the trees when I did yoga in the morning and during hiking breaks . . .

. . . the excitement I felt one time at the top of a steep hill when I was above the hawk I’d seen from below at the bottom . . .

And that’s how I remembered the third thing, the third answer I found for the questions I had posed myself: I needed something all my own, something that wasn’t Love.

Because I am a woman raised in this culture, I gravitate toward the idea that Love fixes things, that it can actually fix anything and everything. When I’m unhappy, what I want is Love, and because my spouse and I are not monogamous, I have access to the headiest drug, what non-monog types call NRE, or “new relationship energy.” So, for example, a couple of years ago, head over heels with a person, I realized that what I wanted—some type of Love Savior—was not the thing I actually needed, which was to quit my job and find work at a place that isn’t an unrelenting shitshow.

When I started biking and hiking, the images that occupied my mind at the very end and very beginning of each day changed: less fretting about things out of my control, less preoccupation with Love; more relaxing, beautiful images of leaves and trees and creeks and clouds, more thinking about how to do something hard better next time, more reliving in my mind small victories, like things that used to scare me that no longer do. I decided on that day two years ago that I needed to save myself, starting with quitting my job, and biking and hiking and camping in the woods is another part of that ongoing project, whether or not anyone else sees or knows.

2 Replies to ““Why are you here?” My hike of the Knobstone Trail”